The trend of Stablecoins has been on the rise the last few years and has major attention in 2019. Being a safe haven from the volatility of the Bitcoin and altcoin market, stablecoins are getting increasing market cap. The days where stablecoins equaled Tether are over, and today the market is much more fragmented. 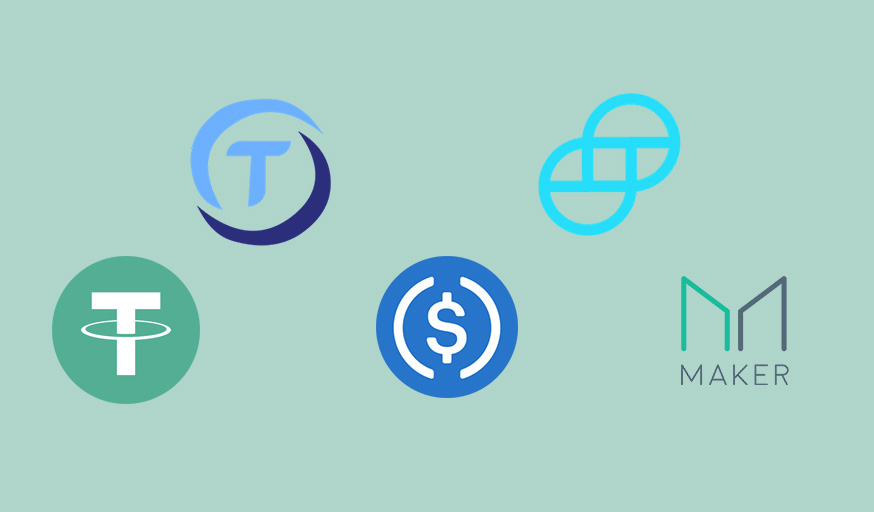 Anyone who's been invested in cryptocurrency and Bitcoin in the last few years has experienced the rapid price movement of the markets. This price volatility creates and destroys value at the speed of market sentiment which if oftentimes a lot faster than would would want as an investor. Of course this is great when markets go up, but even more painful when it crashes. And most investors realize how the joy of winning in the markets does not fully pay for the pain of losing.

The emotional roller-coaster rides investors endure are not the only reason why we have seen a rise in stablecoins in the last few years. As cryptocurrencies becomes storage of value, more investors are looking for stable rather than speculative value.

Stablecoins have come a long way since Tether started trading in 2016, and today you're not just limited to a single coin. The last few years have seen new exciting projects, new technologies and new ideas for the future. Here we will take a look at 5 existing stablecoins you can trade today and a few interesting projects and technologies which could drive the development forward and be major players in the market in the future.

The basics of Stablecoins

Stablecoins are cryptocurrencies which are typically built on blockchain technology, just like Bitcoin. Bu instead of trading at the price that any given buyer is willing to pay, they are pegged to a fiat currency as a reference point. This typically means that 1 of the stablecoin equals 1 of the fiat currency. For instance, the biggest stablecoin is Tether, and 1 Tether has a face value of USD $1.

Of course you could sell your 1 Tether to your friend for $1.5 and this would in effect mean that the value of Tether is $1.5 to that person, but the underlying idea of most stablecoins, is that you can always sell your stablecoins back to the issuing party for its face value and nothing less or more than that.

Stablecoins could in theory also be linked to other assets such as Gold, Oil or sea shells(!), but we have yet to see commodity and other exotic stablecoins to attract any real market value. So far most of the stablecoins are pegged to the US Dollar while a few newer projects have the Euro and Gold as their stable counterpart.

The technology to ensure a stable price for the stablecoin varies from project to project, and none of the stablecoin projects are guaranteed anymore than the trust given in their parent company. This is why you need to be careful and know the risk before converting your fiat money into stablecoins. You might wake up tomorrow and find any of these projects to be a fraud or hacked. But it goes without saying that this is still the case for any investment in cryptocurrencies-related projects.

For many years stablecoins has equaled Tether, and still in 2019 Tether is by far the biggest stablecoin measured in both market cap and trading volume. Tether is adopted by most major exchanges which is a big advantage when moving funds between exchanges.

Each unit of Tether (USDT) is supposedly be backed 1:1 by US dollar by Tether Limited. This has been disputed from other sources, but some proof of of the USD stake has been provided by Tether Limited in an attempt to refuse the allegations and provide transparency. A lot of criticism has been given Tether and its affiliation with Bitfinex, including market manipulation, lack of USD backing, and lack of audit from reputable 3rd party companies.

USD Coin has only been trading since Oct 2018, but in a few months it has risen to the second biggest stablecoin in Jan 2019 with a market cap of $300M. Its success can partly be contributed to the general hype of stablecoins in late 2018 plus wide adoption by major exchanges. This adoption happened partly because USD Coin was launched by Circle, an American fintech that owns the cryptocurrency exchange Poloniex, in cooperation with Coinbase.

In a response to the criticism met by Tether, USD Coin takes pride in transparency and publishes monthly audit reports.

Besides Poloniex, USD Coin is traded on the biggest exchanges such as Coinbase, Binance, and Bitfinex. This cements USD Coin as the major competitor to Tether, not only in market cap but also in adoption.

USD Coin maintains its price by controlling the supply of coins, based on market demand. To control that the price won't drop below $1, USD Coin offers to buy back any USDC coins for the face value of $1.

TrueUSD is another stablecoin pegged to the USD fiat currency. It has been traded since mid 2018 and has quickly become one of the biggest stablecoins measured in market cap and trading activity, TrueUSD is traded on most major exchanges including Binance, OkEx, HitBTC, and Bittrex.

The backing of USD behind TrueUSD is based on smart contracts, and the company behind TrueUSD, TrustTokens calls TrueUSD "The only regulated, exchange-independent stablecoin backed 1-for-1 with US Dollars". Plan for the future of TrustTokens including more stablecoins such as TrueEuro and TrueBond,

The team behind TrueUSD tries to be transparent about backing of funds and business operations. The criticism of Tether has given rise to the recent popularity of TrueUSD, exploding the market cap from $1M in mid 2018 to $50M in beginning of 2019.

Just like USD Coin, TrueUSD maintains its peggin to USD by controlling the supply of coins, based on market demand while offering to buy back any coins for USD $1,

Paxos is another cryptocurrency pegged to the USD. Just like TrueUSD, it has launched in late 2018 at the peak of the stablecoin hype, quickly earning it a place in the top 5 stablecoins and top 50 cryptocurrencies. Launched by the New York State Department of Financial Services, Paxos Standard is the first digital asset issued by a financial institution. It is backed by USD, allowing redemption of any PAX to USD.

Operating under a robust regulatory framework, PAX aims to be a better alternative to USDT. However, it fails to provide any significant advantage over the other top stablecoin alternatives. Major exchanges trading PAX include Binance, OkEx, and Huobi.

The cryptocurrency exchange Gemini, being most famous for its founders, the Winklevoss twins, launched its stablecoin Gemini Dollar (GUSD) in late 2018. They aim to be a “trusted and regulated digital representation” of the fiat USD, providing an alternative to Tether. Another way Gemini Dollar distincts itself from Tether is by supplying independent verification of 1:1 USD backing for GUSD.

Gemini Dollar has oversight from New York State Department of Financial Services (NYDFS) like PAX. The price is controlled by regulating supply of the GUSD coins.

Trading volume of Gemini Dollar is still relatively low, although it is in the top 50 cryptocurrencies at time of writing.

Dai stands out from the crowd, being a second-generation stablecoin which enables the issuance of the US dollar on the Ethereum blockchain. This is a very different approach from the other stablecoins which do not have a technological solution for controlling price stability.

DAI uses a complex system of Collateralized Debt Position (CDP) through smart contracts to keep its price stable. This means that every Dai is backed by another asset of value, all operated by smart contracts on the Ethereum blockchain. This makes DAI the biggest decentralized stablecoin.

Being decentralized means you are not relying on a company to back your assets, but instead on a smart contract. Although this sounds great, security is not guaranteed as anyone who remember the DAO can testify.

DAI is developed by MakerDAO and traded on bigger exchanges such as HitBTC, Bitinka, and FatBTC.